You are here: Home / Blog / The CDC Zombie Apocalypse Post

(Editorial Note: The CDC post mentioned in this post has been removed from it’s original location.  However you can still read it on the Internet Archive here. Be patient, the link takes a while to load.)

In 2011 the Centers for Disease Control (CDC), a quintessentially staid and stolid government bureaucracy, did something quite unexpected.  They explained how to prepare for a zombie apocalypse.  Yes, a zombie apocalypse. On May 16th, 2011, a blog post authored by Ali S. Khan, CDC Director of Preparedness, appeared with the strange title Social Media: Preparedness 101: Zombie Apocalypse.  Readers didn’t quite know what to think. 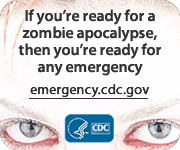 Of course the CDC had not totally lost its grip on reality.  Nor were Zombies a real threat.  The CDC was merely using a clever – and tremendously successful – method to attract attention to its annual push for disaster preparedness.  According to an excellent account and blow-by-blow timeline on The Benshi, the unexpected post was the brainchild of two CDC employees, Catherine Jamal and Dave Daigle, who were searching for a way to motivate people to do some disaster preparedness at the beginning of the hurricane season. Soon the post was generating incredible viral publicity (Writer Randy Olson reported that the CDC media analyst Cision valued the P.R. at $3 million), being featured on The New York Times, Fox News, the Huffington Post, Time Magazine and hundreds of websites.  In less than a week the post had received 963,000 page views. If you read the post, I think you’ll agree that it was indeed moderately clever, but certainly nothing breathtaking.  So what was the secret to it’s success? I think it has to do with three things:

Return of the Zombies

Of course there are consequences.  In 2012 the CDC was once again enmeshed in zombies, but this time repeatedly, and incredulously, trying to debunk the rumors that the dreaded zombie apocalypse had actually begun (see the Huffington Post report here).

Oh, and by the way, in case you’re curious, the following is the list of the most important items to have on hand for when the undead are unleashed:

For a full disaster preparedness checklist, the CDC has a less humorous, but certainly more complete page.

Ross Barefoot got his start in small business managing an importing company in the bicycle industry.  While there, he tried his hand at programming to find more effective ways to track, market and sell his company’s range of bicycle parts. He loved the web marketing side of things so much he became a professional web developer in 2001, starting a website design business in Western Colorado. He took his first SEO certification course from the Search Engine Academy in 2002, followed it up with another in 2004, and decided to jump full time into SEO training and consulting in 2011, becoming a Master Certified Instructor with the Search Engine Academy, where he continues to serve on the Board of Directors. Today, Ross is CTO, trainer and chief SEO strategist at Horizon Web Marketing (www.horizonwebmarketing.com), a full-service digital marketing agency based in Las Vegas.

How to Create Killer Product Pages

14 Ways to Get Backlinks Without Begging

Things That Kill Productivity: How to Work Less and Do More